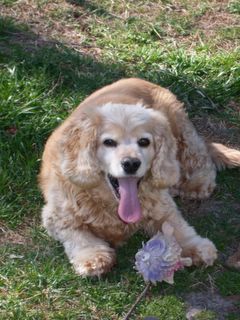 This is Max. He came into our lives in May of 2003 about three months after the death of our dog Dixie. I didn't want another dog. But I have a tendency to pick up hopeless creatures. I went to pick up some of my daughter's things at the Math & Science school and this mop was sitting on the porch of her dorm. One of the girls was feeding him some bread. He was so furry it was hard to tell which end was which. I hadn't seen him hanging around before. The lady in charge of the dorm said that the college kids fed the strays, but when they left school for vacation or summer break the animals were left to fend for themselves. Since MSMS was still in session, they sought out the kids for food. I moved more stuff out and tried to ignore him but kept thinking about "the mop".

Finally, I said to myself "If he is still there this last trip down and if he follows us to the van, he can come home." He was still there. He came when called. He hopped up into the van and sat on an old beach towel. We took him home. He seemed used to people, not too scared and liked to have his head petted, but he wouldn't let his tummy be touched or his paws. He was matted terribly. I managed to cut three large ones off the top of his head but I could tell he had a huge matted area on his belly. So I knew it was the vet for him.

He was so badly matted and scared that they had to put him under anesthesia to cut away all the mats. His claws had grown so long they grew around and into his paw pads. No wonder he wouldn't dig, his paws were sore. After the shaving, they bathed him. He had a skin infection with huge patches of hair missing. They checked him and he had heart worms as well. So, he stayed another two nights for the treatment. Our vet said that he was about five years old and had been someone's pet because he had been neutered. No collar, no tags. He came through his treatment fine and is now heartworm free.

He looks like a blonde cocker, with a lighter and finer blond patch of hair on the top of his head that stands straight up, like a mohawk. We named him Maxwell. He doesn't like to get wet, probably because he had to be out in the weather so much, the wet fur mats causing his skin irritation. He still won't dig. He loves to show off, play with toys, chew on rawhide chews, and sleep. Now he has an insulated dog house with a covered front porch, a dog door, a linoleum floor, a light for heat in winter and a fan for summer. (The dog house he had in Mississippi had an air conditioner.) He loves to sleep in the sun on his big dog mattress and his hammock.

Max is possessive of his food and his toys. He still doesn't let you rub his tummy or touch his paws. He's hard to work with if you have to put eye drops or ear drops in and he will snap and growl at the vet. Grooming has to be done under anesthesia, he gets so hysterical. Something about the sound of fire engines sets him off and he yowls and howls like he is dying. We still love him. He is the funniest dog I have ever known. He's smart and loves to be the center of attention. Hopefully he will someday learn to relax and know that he won't have to be out in the cold and wet, or sleep on the hard ground, or walk on infected paw pads, or scrounge for his next meal. I want him to know that he's safe now; he's home.