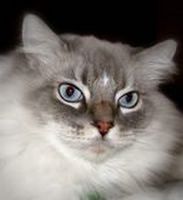 Sir Nicholas Alexander of Brevard, aka Nicky or Nickerdoodle, is a blue mitted lynx Ragdoll. He and his sister, Lady Wilhelmina Abigail of Brevard (Willow or Willowbean), were Christmas gifts from my parents.

We were told that as a baby Nicky was usually too busy at mealtime; he was often lounging while his siblings ate. He would saunter up late to the table and sometimes mom was finished handing out the meals. He was smaller than his sister because of this. The first night at our house, Willow explored and ate and climbed up a rattan bookshelf in the middle of the night. Nicky hid under the bed, propped up against the baseboard. He wouldn't eat or drink water.

After a day and a half of this, I knew he would soon get in trouble and could die if he didn't start eating. So we bought some kitten formula and tried to feed him with a syringe. That was the magic pill! He lay on his back like a baby, both front paws around the syringe and sucked all the formula down in less than a minute. Then he started eating his dry food.

Today his is grown up, although still smaller at 14 pounds than most male Ragdoll cats. He is loving, sleeps on his back, snores, rolls over for tummy rubs and still things his main duty is to prop up the walls of the house. He knows he is gorgeous with his darkly outlined pink nose and his almond shaped blue eyes rimmed with white "eyeliner". He is in love with his "cousin" Maggie (another Ragdoll) and follows her around the house like a puppy dog. But, alas! She just hisses, spits, growls and runs away.
Submitted to Friday's Ark